If you’re a twitter follower of mine you may already be ‘virtually’ acquainted with the new man in my life. No, I haven’t traded my husband in for a trendy new model, instead, we decided to turn two into three and invited a tiny pup into our home, so yup, I’ve become one of those annoying ‘doggy mothers’ who like to overshare pictures of their pooch. You’re very welcome! 😉

We picked him up just after new year, which explains away my ‘radio silence’, that and a move from London to Manchester and settling into a brand new job. So yes, I got a puppy, new job and headed up ‘North’ which gave us a solid excuse to spend a weekend in Edinburgh, being a mere 4-hour drive away!

I’ve wanted to take a trip here for a very long time, so it was a case of throwing a few clothes in the car, along with dog bowls, dog bed, and the pup to head up to the Scottish Capital for a fleeting visit…

Five things to do in Edinburgh:

Voted the number one attraction for Edinburgh, and handy for us, right next to our (dog-friendly!) Airbnb, trekking up Arthurs Seat isn’t one to pass up. This incredible geological feature right in the middle of Scotland’s capital is a fairly easy-going hike and ticks all the pooch friendly boxes. And, if you, unlike us manage to catch a day yourself a fog-free day, I’ve been told the views from the tip are awesome. Despite the drizzle, Pablo managed to break through his fear of rain to show-off his new waterproof coat to fellow walkers, although he did insist on being carried down the hill on the return! 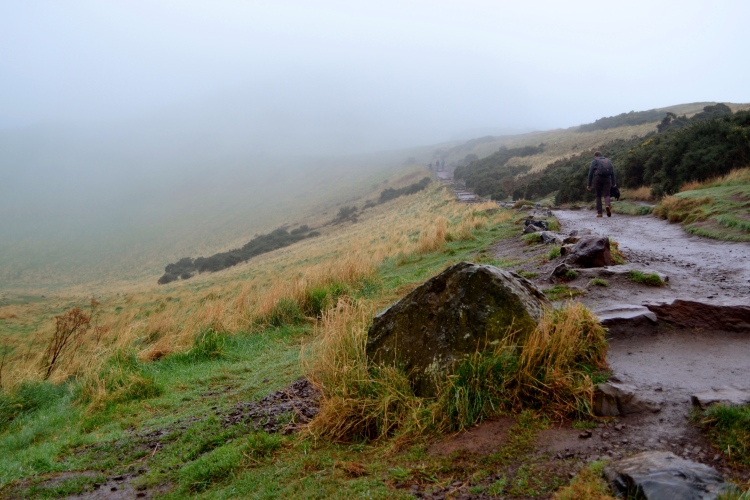 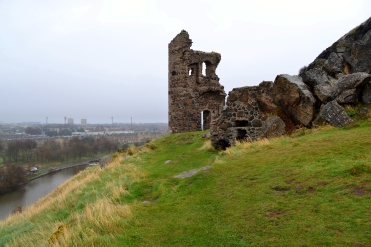 Edinburgh is known for its Harry Potter-esque cobbled streets and towering grey buildings so exploring the old town and the Royal Mile route is a must. Even with the help of Google Maps, we managed to get lost in the Escher-like maze of bridges and underpasses, but even so, there are certainly worst ways to spend a day than getting lost in such a stunning city. We were able to take in sights such as Edinburgh Castle, Greyfriars Cemetery, Holyrood Park, The Scottish Parliament Building and stand outside the ‘birth place of Harry Potter’; Elephant House where J.K Rowling penned the beginnings of the popular novel series. (yeah, Potter Head alert!) 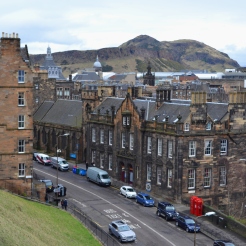 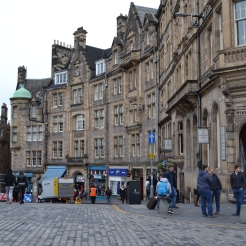 How many thousands of times have you seen this view on Instagram? Exactly! I wanted to capture one of Edinburgh’s most recognised panoramas with my own eyes. An easy walk from New Town and down Princes Street, Edinburgh’s main shopping promenade, Calton Hill gives you this Mary Poppins style view of the chimney pots and roofs across the city alongside a few of Edinburgh’s historical monuments. 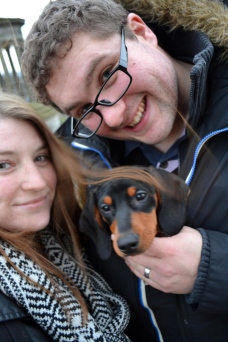 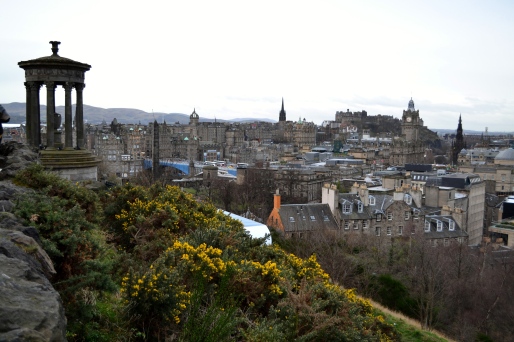 Whether you believe in the paranormal or refuse to think that there’s anything spooky about ectoplasm, taking a tour of Edinburgh after dark is a must. It has been said that this city is one of, if not the most haunted place in the UK, so if you’re going to catch a ghoul it’s going to be here.
Although our guide admitted it was a little different to have a dog join tour (it was apparently a first!) the City of Edinburgh Tours were quite happy to have Pablo tag along. We got taken on a wander around the streets of Old Town, whilst our guide told us the stories of the past; of torture, cannibalism, disease, grave robbing, crowded graves and grief stricken dogs! We then descended into the vaults below the city; a paranormal hot spot where it’s said that an old woman likes to lurk in the darkness and dolls are often found rearranged after the ghost-children come out to play. Spooked yet?

Laze About On Portobello Beach

We have our Airbnb hosts for this gem! On our last day and (sod’s law!) our only sunny day in Edinburgh, we drove a few minutes out of the city towards the coast to spend some time at Portobello Beach. The area was a peaceful traditional British seaside promenade with ice cream vans, cozy cafes and lots and lots of dogs! 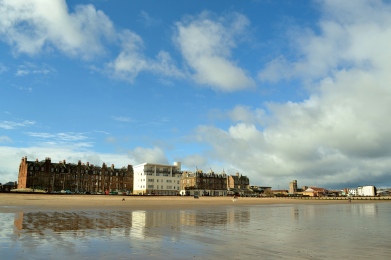 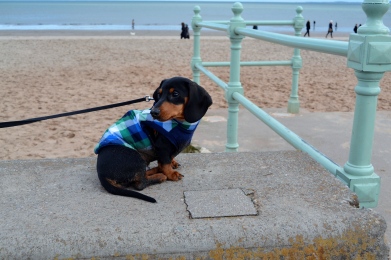 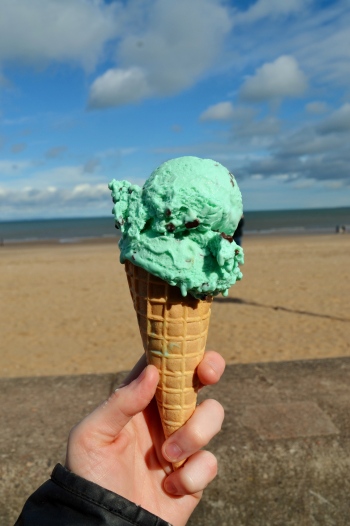 Five places to Eat and Drink in Edinburgh:

Brunch at The City Café

During our short break in Edinburgh, The City Café became a firm favourite for brunch. In fact, by the third day, we didn’t even have to consult each other on where we wanted to go, we just caught an Uber straight there. This American style Diner welcomes pups and their well-behaved owners seeking bumper-brakes; Pablo appreciated his bowl of water but quickly discovered he was partial to black pudding and haggis from our full-Scottish breakfast, giving it his paw print of approval!

Haggis at No1 High Street

On the corner of the Royal Mile, No1 High Street is a traditional British pub with real ales on tap and a whopper of a whiskey selection (well, we are in Scotland!). They also serve great value, no fuss, pub grub including the admittedly touristy choice of a stack of (locally caught! ;)) Haggis, neeps and tatties. Pablo was welcomed in with a bowl of water which we (half) joked could have well have doubled up as a bath (theses guys are used to the slightly larger variety of pups stopping for a pint!)

We managed to catch Zebra Coffee Company just before closing gooey brownies and hot chocolates. This tiny independent place is dog friendly and the perfect place for a rest after exploring the castle or escaping the rain.

Brewdog‘s craft beer bars are places that you can guarantee your pooch will get a ‘paw’some’ welcome; treats are on the bar and water bowls are offered, usually before you’ve had a chance to peruse the beer board yourself. I have to say it helps quite a bit that the pints here are just as fantastic as the service, and I’d been visiting Brewdog way before this ‘wee dug’ entered my life. You just can’t beat the chilled out vibe of their bars.

A Scottish Breakfast at Miros

Whilst spending a morning chasing waves at Portobello Beach, there wasn’t anything better than stumbling upon Miro‘s, a dog-friendly beach front café with a full Scottish Breakfast on the menu. As our only sunny day, we chose to stay outside with our sandy pooch, but they also welcomed worn-out dogs inside too.

So, is Edinburgh Dog-Friendly?

Yes and no. With anywhere you are taking your dog you are hoping for good weather for the best part, as you’ll want to spend a lot of time outside, sightseeing, as you can guarantee that simply walking the streets with your dog is a perfectly acceptable pooch-friendly activity. In terms of restaurants and drinking holes, I did a fair bit of research before visiting and found that some sources were more reliable than others. Dugs n Pubs was our life line, however sites like Yelp which featured user complied lists of supposedly ‘Dog-Friendly’ places was full of inaccuracies. You live and learn! Weirdly we also came across one Ghost Walk who denied our attendance, which I’m pretty sure is blatant discrimination (Uh, you’re telling me I can’t bring my dog on a walking tour of outdoor public places? okaayyy!). On the other hand we came across all the wonderful places I’ve written about here, which isn’t anywhere near an exhaustive list of the places that would welcome pup, and I can’t tell you a number of times we got stopped in the street for a chat (and a puppy cuddle), or when the guy at the takeaway shop invited us all in and treated Pablo to a sausage on the house!

Why Should I Travel With My Dog?

There’s a number of reasons why you shouldn’t bring the dog along with you; not everywhere is dog-friendly, or suitable for your pup which limits the places you can go and things you could see, and when the weather is particularly awful it can be a drag to carry a wet and unhappy pooch along with you, however, all going well travelling with your dog can be super rewarding!

The bottom line for taking your dog on your travels, whether it be an extended trip or a short weekend break is whether your pup has the right attitude and temperament to adapt and embrace new places and people. If your canine is a nervous wreck each time you defer them away from their normal routine, isn’t comfortable around strangers or promptly throws up in the car following a trip to the corner shop, your dog probably doesn’t share your want for adventure. If this is the case they might be happier staying with a friend or relative whilst you’re off exploring.
On the other hand, if you’ve got a dog anything like Pablo who despite the odd hiccup (he can’t be an angel all the time!) enjoys the car like his second home, greets strangers like old friends, and for the most part behaves himself when he needs to, then have you thought about giving the kennels a miss and bringing your dog along for the ride?

Oddly, when I mentioned my little 4-month-old puppy was going to be sightseeing around Edinburgh with me, I came up against a lot of side-eye. Considering this isn’t an epic ‘sell the house, quit the job, yeahhh wanderlust foreverrrr’ type of travel, I mean I was literally hopping over the border and back again, I found this reaction a little strange. Well yes, traveling with a dog isn’t a walk in the park… actually it essentially is, but you catch my drift (!), if you are prepared you can find out how your pup can make your holiday even better! 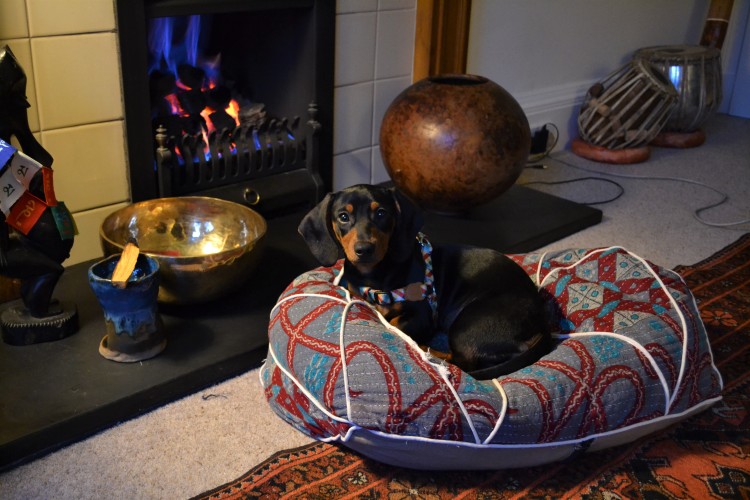 How To Be Prepared To Travel With Your Dog:

Benefits Of Travelling With Your Dog:

Anyone else like to take their dog on a mini-adventure? Anyone go further afield? Anything I missed from Edinburgh? What would you have recommended?

One thought on “Edinburgh; Mini Guide to a Dog-Friendly Weekend”