I utterly love Europe. Sure, I can get a little contented about where I live sometimes, but other days you’ve just got to give yourself a sharp elbow and remember that being part of this continent makes it possible to spontaneously hop over the sea one weekend, day-trip in fantastic cities such as Dublin, and be back to work by Monday without any need for laborious Visas, extra baggage charges or even to engage the out-of-office!

Each time I’ve visited Dublin previously, it’s been fleeting. But coming from England it’s pretty easy, geographically to dip in and out of Ireland. It helps, of course, that Dublin is the size it is; the city is compact which lends itself to day-trip / weekend break territory. Grab a Guinness, take a selfie with Molly, gush over the accent (Sorry, essential tourist activity) and steal a bit of the Irish charm before heading back to English terra firma. So ideal! This time around we were fresh (read: half dead) from our Snowdon hike and were able to bring along the pup thanks to dog-friendly ferry, Stenaline.

I shan’t indulge too much into Dublin’s background, it might be small, but it needs little introduction; It’s a city famous for the black stuff, bars, excellent craic, gritty industrial skylines, the friendliest and feistiest locals, a world renowned literary heritage and being the birth place of ‘Penney’s’! 😉

The Obligatory Guinness In Temple Bar

Our coach transfer from the Stenaline ferry link dropped us at the bottom of Fleet Street, as if they were encouraging us to make the short walk down the road to arguably Dublin’s most famous landmark.
I’m not one to shy away from ‘tourist activities’ so felt no shame in handing over some Euros for a round of steeply priced half pints of Guinness at Dublin’s Temple Bar. Hell, it’s a novelty; partly an initiation into the city. Regardless of your taste for the drink either, it’s practically not an option for a tourist to walk in and order anything other than Ireland’s best stout, so don’t even think about ordering a Rum and Coke. 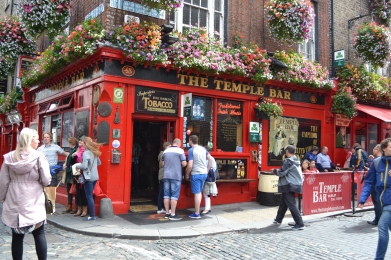 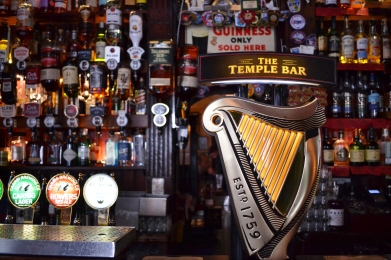 A Stroll Around The Gardens At Trinity College

As Dublin continued to greet us with a steady drizzle we zipped up our rain macs and took a stroll around the courtyard of one of the more charming areas of the city. Trinity College is noted as the country’s most prestigious Universities and probably one of the prettiest locations to get an education. We were told that the students were often superstitious of the bell tower arch in the centre of the courtyard; the first time they would walk under it would be when they graduate, any sooner and they’d fail their degree. Strapped for time, we weren’t able to visit the inside of the building (gutted!) but I would have loved to have spent some time in Trinity Library, a key destination for Potter heads.

Crossing The Liffey Via Ha’Penny Bridge

Ha’penny Bridge, the very first pedestrian bridge to cross the Liffey River, named after the toll needed to pass over it. Apparently, back in it’s day just 450 pedestrians chose to walk this route each day – contrast that to the 30,000 locals and tourists who now walk over it from bank to bank. Admittedly Dublin’s water front isn’t the most charming in Europe, but it’s a pretty bridge with romantic, old white arches, full of history in the heart of the city.

it’s practically pilgrimage to pay Molly a visit. Whether she was actually real or not still hangs as a question mark, but the story tells of a girl called Molly; a beautiful young fish trader on Grafton Street who died as a teenager after catching a fever. There’s now a statue in the centre of Dublin and a well known song dedicated to her; the unofficial anthem of the city. Take a selfie with Molly, or literally ‘grab’ the opportunity to give her bust a rub (apparently that’s a tourist ‘thing’!).

Lusting Over ALL The Doughnuts at Rolling Donut

We were practically ordered to visit Rolling Donut by a local, an order that we had no qualms to oblige to. Trying to decide which flavour though was the epitome of ‘hashtag first world problems’ that day. But really! Banoffee Pie, Bailey Bliss, Nutella and Marshmallow, Peanut Butter and Chocolate Crunch, you can even select an apple cinnamon flavoured ‘Molly Malone’. I’d entered Doughnut nirvana; curses to my stomach for only being yea big.

Walk To The Spire Of Dublin On O’Connell Street

A simple structure, but it’s sheer size makes it so impressive; it’s colossal! It’s so high it half doesn’t look real, like a super imposed projection cutting the sky in two in the middle of busy O’Connell Street. It’s a quick stop though; O’Connell Street doesn’t have much to offer unless you’ve got time to shop at Dublin’s Penney’s!

Break Away From The Crowds At St Stephens Green

With no time to travel west to Phoenix Park but still wanting a pause-break from city-bustle, St Stephens Green proved to be the calm urban-oasis that we craved for a quick breather. Right at the southern end of the busy Grafton Street, we could wander around the duck ponds with the dog, and through the fountains and flower beds. It was a bit much to hope for a bit of sunshine, but it was still a lush walk that made a change from the pubs! 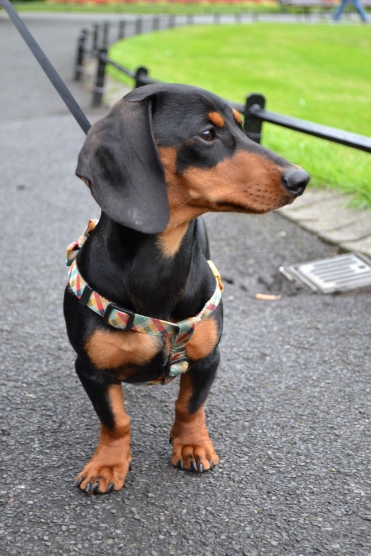 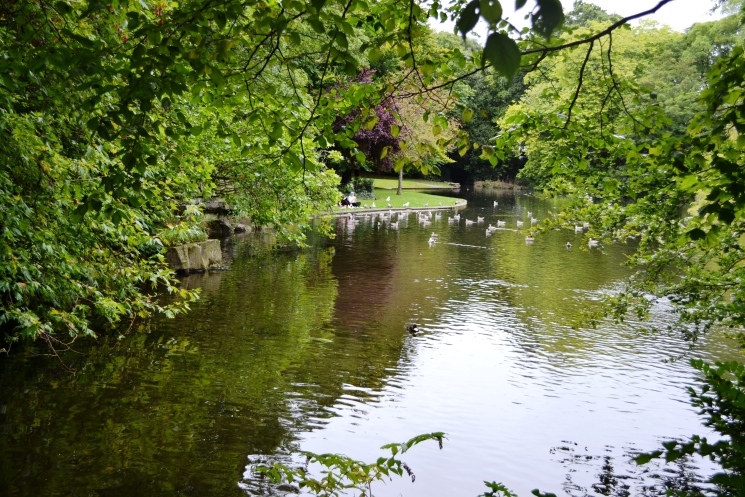 Have Another Guinness At Grogan’s Castle Lounge

Okay, time for one more? When in Dublin, eh? We found this dog-friendly pub, known as just ‘Grogans’ by the locals; described fondly as a ‘Dublin drinking institution’ apparently has a documented history of being frequented by various painters and writers. This cosy pub has a very lived-in vibe, and we were greeted by the door and welcomed in by the landlord as if we should make ourselves at well at home in someone’s sitting room. It was very broken-in with worn and comfy benches and a totally un-curated ‘gallery’ of artworks clinging to every inch of the walls. A round of pints later and we were feeling part of the furniture, and Pablo was enjoying belly rubs off the punters at the table next to us. 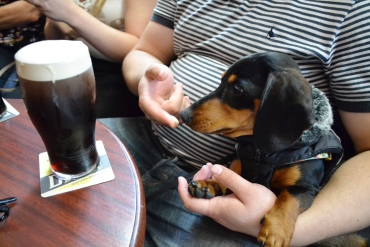 You’d be forgiven for not realising that Dublin has a Castle; this is my third trip and I didn’t know! I’m excusing myself over the fact that this historical building doesn’t resemble a castle in how Mr Disney taught us to expect one. Anyhow, right in the middle of the city I found the courtyard for the Castle, and ‘fun fact’ (something I learnt from a recent pub quiz – I got it right, lucky guess!) this is the site where the city found it’s name ‘Dublin’. The Black Pool translated ‘Dubh Linn’ was once was in the Castle garden. 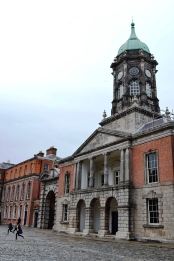 You only had SIX hours in
Dublin though? Was it even
worth the effort?

Um, yeah! I mean, ideally we’d have a tad more time to play with, but a day trip is ideal. The Stena line ferry departures will leave you a little sleep deprived; with a 9 am start and landing back into Holyhead at midnight. However, this pint-sized Irish capital can be experienced in just a few hours. Sure, you will compromise on forgoing the excellent ‘craic’ in the evening where the city becomes a little less sober and more saturated in the black stuff; live music, dancing and drunken exchanges with locals by the Liffey. But with the time you’re given it’s proven that it’s more than possible to get some Guinness in you and check off a good chunk of the tourist sites.

As for the ferry across to Ireland; we booked as foot passengers with Stenaline on the Holyhead to Dublin route taking advantage of the Sunday Daytripper offer of £12 per person. The pup cruised for free in the on-board kennels on the car deck. Despite the ferries not being my first choice of travel (hold my sick-bag!) and a couple of niggles with the state of the ships (our outbound ferry wasn’t the most modern of transports, though it was perfectly acceptable on the way home!), I’m still going to call that damn good value.
Seriously, we just got a holiday for what some would class as spare change!

How Much Is A Day Trip To Dublin?

A return ferry crossing with Stenaline was a solid steal at £12 per person, I bought a hot chocolate for £2.70 on the outbound trip and an evening meal and a drink for £7.00 on the return boat. Getting from the boat to the city centre we opted for a return coach transfer from the ferry port to Trinity which was 5 Euro. Purchased one doughnut and a hot drink for 5 Euro at Rolling Donut, had half a pint of Guinness at Temple Bar for around 5 Euro, another whole pint of Guinness at Grogans for around 5 Euro, a lunch time snack from the corner shop; a hot goats cheese pizza slice for 3 Euro. Everything else? Free! The rest of our compact itinerary consisted of walking the streets and sightseeing the city.

There’s a few more things that you could have squeezed in if you have some more Euro’s in your budget, like a visit to the Guinness Factory which I had done on a previous trip (recommended, if only for the Skybar at the top!) or opting to visit the Book of Kells, which admittedly I haven’t done.
However, tallying that up, I got an Irish experience for approximately 40 flipping quid. Oh come on! Impressed?

Catch up on my blog post on Wales – the day before Dublin we scaled Snowdon! We more than earned that Guinness!

I’ve also been to Belfast in Northern Ireland, so check out what I loved about Belfast HERE