Habitually, I enjoy imitating a small hibernating bear throughout the festive season. I’ll book those few days linking Christmas with New Years off on annual leave, create a nest for myself on the sofa, unashamedly veg-out in the same set of PJ’s, chow down triple the recommended dose of camembert and steadily sup away through a decent sized bottle of Baileys in front of the TV. It’s a beautiful life.
This year I decided to change it up a bit and enter the new year with a bit more pizazz. New Years Celebrations in Reykjavik? Hey, why not.

Leaving the old year behind at Iceland’s Blue Lagoon 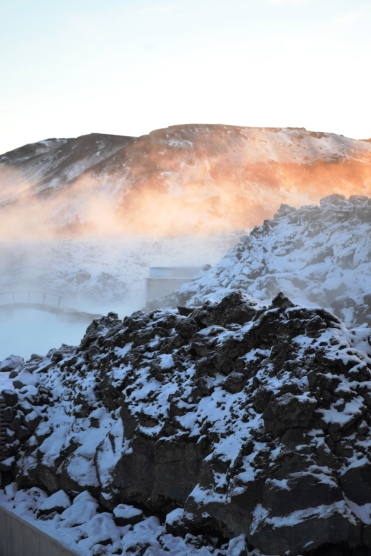 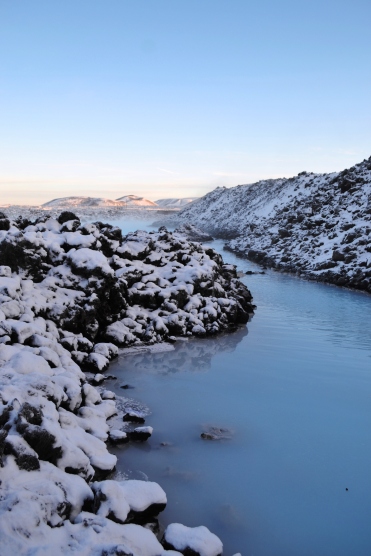 Relaxing in the Blue Lagoon

This isn’t up for debate when I say there genuinely can’t be anything better.
What could be better?!

Soaking away the stresses of two thousand and seventeen (of which there were many) in the pastel blue waters of the Blue Lagoon. Sure, this place is marmite to many; love it or hate it, I just ticked off my fourth visit and I still believe it’s a cracker of an experience. And yes, the entrance fee will lighten the wallet, but as a New Year treat; cleansing the pores with silica mud masks, sweating it out in the steam cave, drifting around the pool surrounded by snow topped lava rocks and detoxing with a Skyr smoothie? I suppose I wasn’t missing my sofa so much any more.

Firing up the evening with a Brennivín around the Bonfire 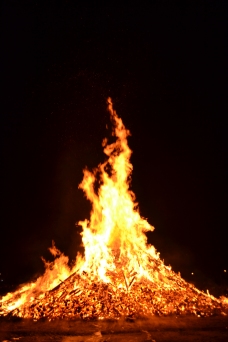 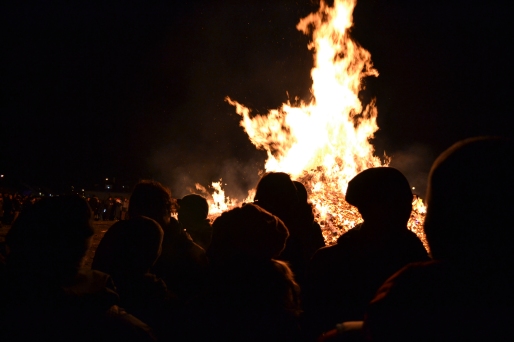 The crowds at the bonfire

Mid-evening and the fireworks had started a few hours prior… but a different New Years Eve tradition around Iceland is to light massive bonfires, hang out, and start the countdown to midnight together.

It was deliberately meant to sound that simple, because the actual event seemed so wonderfully, refreshingly unorganised; a mound of wood on fire in a field. No barriers, no ropes, nothing commercial, nothing really much else apart from a few hundred people gathered around the flames, chatting, drinking and having fun.

Reykjavik has a handful dotted around the city, and more in the greater city area, but we took a walk out to our closest one (Ægissíða) by the westerly coast; mingling with the crowds with a miniature bottle of Brennivín (buurrrning the insides!) as the heat of the fire singed our cheeks.

Wish it hard enough and they will come! Alright, maybe not quite how it works, but on our only night in Iceland a little bit of luck came our way and the Northern Lights danced for us over Mount Esja.

It was beautiful and ridiculously brief; much softer than I’ve seen previously but it was no less amazing. (Internal screaming!)
The Northern Light forecast kept jumping around every half hour, a solid ‘four’, promising strong displays and then dropping sharply to a ‘zero’. We did have clear skies though, so if they were coming we’d see them. So just as the forecast switched up to a ‘two’ we ditched the bonfire made our way over to the Seltjarnarnes Peninsula; close to town but away from the citys’ light pollution, and as we pulled up, with two hours to go until midnight, the green bow pulsed brighter and began flickering and curling across the horizon.
Two minutes later, nothing but stars. 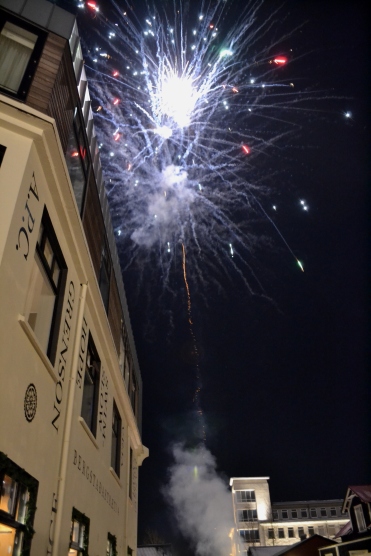 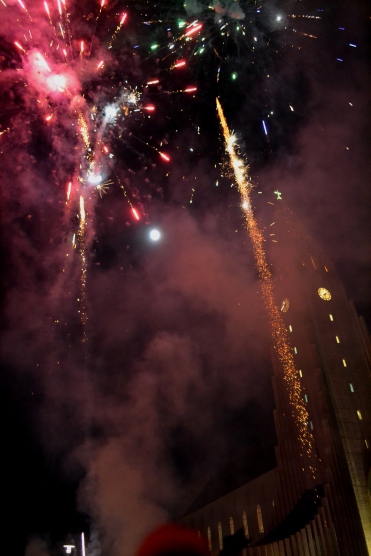 Let this be said; I won’t experience fireworks like this again.
Reykjavik is MAD.
There’s no organised display, but New Years is one of few times the fireworks ban is relaxed and the locals just go properly insane for them. Icelanders buy boxes of the stuff and, not waiting for the countdown to midnight, just start letting them off whenever they fancy. The result is just this furiously chaotic, absolutely mind-blowing effect of hours and hours of miles and miles of light, colour and noise across the city. Just taking a walk around 101, you’d just see people halt the crowds, lay down a box of fireworks on the side of the road and just let it go wild. Firecrackers deafening you from a few metres away, kids with sparklers and explosions frigging everywhere… (!)
Just before midnight we made our way up to Hallgrimskirkja for a view across the city and when it came to the big moment, Reykjavik just erupted.
‘WHAT THE HELL ICELAND?!’
It was the best kind of RIDICULOUS.

The fireworks persisted until about 4am, not that we could get much sleep, having booked the cheapest and coldest guesthouse room in all of Reykjavik (What a winner). We got turfed out at 10am, when it was still pitch outside; oh ‘hey’ twenty hours of darkness! My body was jarring from the shock of not getting any reasonable rest having shivered for most of the night. Still, I was about to put body through something much more intense. 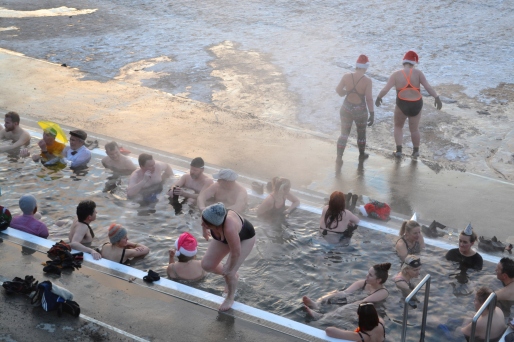 Chilling in the hot pot with Santa and co. 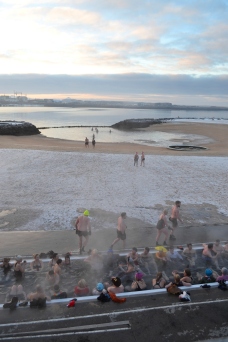 The coldest beach i’ve ever been on…

I’m mad. Clearly. I rocked up to Reykjavik’s Geothermal Beach with a mind to have a bit of good-natured laugh at the locals taking part in the traditional New Years Sea Swim and ended up being persuaded in myself.
Not even persuaded though, maybe it was just a lack of sleep resulting in temporary insanity followed by a heavy bout of FOMO. What I am doing…
Locals in various states of quirky fancy dress; Santa hats, fish hats, horses heads, Bavarian lederhosen, ball gowns, tinsel wigs and volleyball get-ups gathered around the hot pot taking selfies and jeering at each other’s costumes, when finally someone started a procession down to the ocean.
I think I panicked and started following the group, trailing behind in just my string bikini, vaguely worrying that if I’m cold now I’m probably going to trigger a heart problem if I’m recklessly plunging myself into the North Atlantic. Huh.
Was it cold? Uh yah, my legs almost fell off. I couldn’t hack it. I waddled in up to my hips, bobbed down for half a second, spotted another girl turning back to beach and headed after her, as fast as I could move after losing feeling in my feet. ‘Tourist?’ she asked me, ‘Me too’ she laughed. Well, we gave it a good shot…

Ready to take on two thousand and eighteen though? Hell YES.

12 thoughts on “Why I Couldn’t Have Started My New Year Better Than This: New Years Eve In Reykjavik” 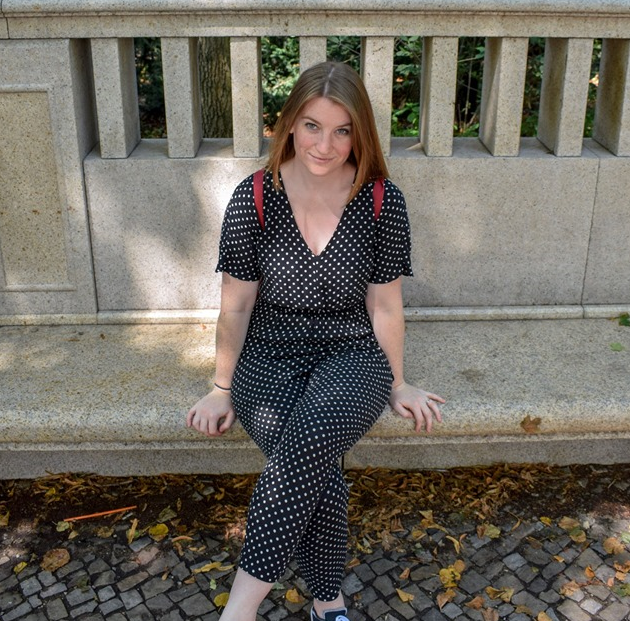