“Lads, lads, lads, we’re off to Zant-ayyy!” is what I’m sure you’re thinking.
Zante? Really, Michaela? I didn’t have you pinned as Ouzo-guzzling, out-until-dawn, hard-core raver? Well, no, I suppose you’d be right. I’m approaching thirty, and I’m very partial to a comfortable bed and a good cup of tea. So what am I doing in Zante?
I’m as surprised as you to discover that, whereas Laganas party-centric Brits-abroad reputation precedes it, it’s all too easy to skirt around the club scene and fully embrace the islands’ laid back side; exploring world-class beaches, turquoise waters, stunning sea life and fantastic Greek food!

This was my first taste of Greece and one of my first beach holidays in a very long while, so did I love Zante, and what did I get up to?

One of the best ways to start to discover Zante and the sights in the Southern part of the island is to catch a boat tour that takes you turtle spotting in Laganas bay, over to Keri caves and across to Marathonisi Island. Our boat had three scheduled departures throughout the day, so we paid twenty euros and took the 9am slot, hoping that, at that time, most of the islands visitors would be tending to a fishbowl induced headache from the previous night.
First off, the boat took a slow loop around the bay and it wasn’t long before our guide gestured out the left to signal the sighting of one of the islands resident sea turtles. After watching the little guy paddle about for a few minutes and finally glide away, we powered off around to the southwestern side of the island, home to turquoise waters and impressive natural rock arches carved from the cliff face. The water was just too tempting, so when our guide asked us if we wanted to stop for a swim, we’d already stripped off to our swimsuits!
Our final stop was Marathonisi Island, or Turtle Island as it’s known, has been nick-named as such for it’s distinctive shape; that undeniable hump of the turtles back. Much of the Island is protected by the National Marine Park and you’ll see areas roped off where turtles had made nests. As we all know, Lagunas is notorious for it’s intense party scene, but second to this, the bay is well known for it’s large sea turtle population; home to the endangered Loggerhead sea turtles (Caretta Caretta). All around the bay, the sandy beaches are protected to keep the sea turtles coming back to Laganas to nest. The long stretch of beach between Lagunas and nearby Kalamaki is closed off at night during the mating season, ensuring that the turtles are undisturbed when they are laying eggs. Volunteers keep a log of where the nests are formed on the beach and surround the nest with a simple wooden structure, which signals for us to avoid the area to prevent damaging the nest.

But is Zante doing enough to support the sea turtles? It seems to be a well debated subject, and sure, I visited just before the island swings into summers ‘high season’, but most of what I saw seemed to be largely positive. Hiring our motorboat they were eager to pass on the list of ‘rules’ for the area; yes, you can take the boat around the bay, but we were required to keep the boat at a slow speed, keeping an eye out for turtles, cutting the ignition if one approached the boat. We were also told we weren’t allowed to cast anchor in the bay to avoid hurting the wildlife and the section of coastline to the east of the bay was completely out of bounds, as this is a fully National Marine Park protected area. Of course, we shouldn’t chase them, or touch them.
With water sports being banned in this area of Zante, to benefit the turtles, I thought the bay seems comparatively quieter than other seaside resorts, and there were only a handful of other boats and pedalos out at any one time. So far so good!

Visiting in June meant that we were in Zante at the latter end of the mating season, as it moves into the hatching season, so it was likely that the Loggerheads would be present in the bay at this time. But as with all wildlife, I was fully aware that sightings aren’t always guaranteed, (throw back to our couple of whale-less whale watching tour in Iceland!), however, and it may be that I was wildly lucky, but we were able to easily spot at least a dozen sea turtles gracefully bobbing around our boat, less than a hundred feet from the shore.

With no other boats around, it was more often than not, just us and the turtles – either watching the creatures from the boat or sliding into the water to snorkel nearby.
Pure bucket list territory to watch these incredible turtles in their natural habitat. 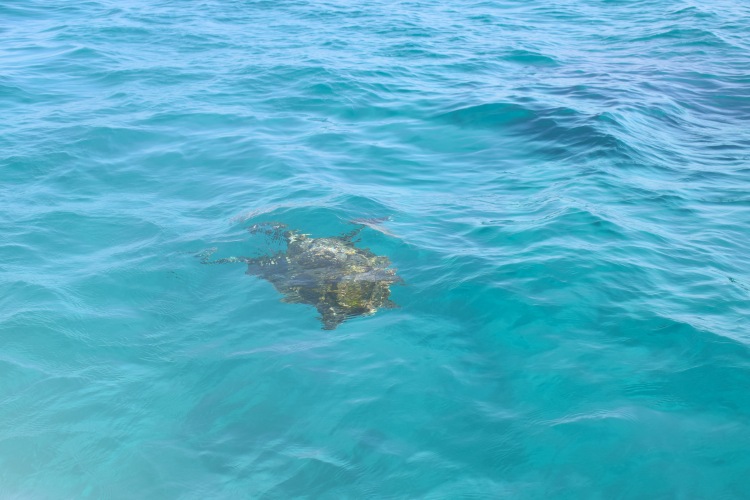 If there was one not-to-miss sight to put on your Zante itinerary, it’s taking a trip to the north of the Island to look down on Navagio Beach.
Navagio Beach, or Shipwreck beach as it’s more commonly known, is one of the most recognised beaches in the world – admired for it’s shockingly steep chalky cliffs, white sand and impossibly electric blue sea. Boat tours take tourists around the island to the beach, as it’s only accessed via the sea, but for me, it was more important to capture the sight from above to fully appreciate the this stunning view – despite discovering I don’t have the best head for heights… (!)

This place was the sole reason why we got a hire car, and for all the steep, winding and worryingly narrow roads we encountered on our hour long drive to the north, the view was absolutely worth it! 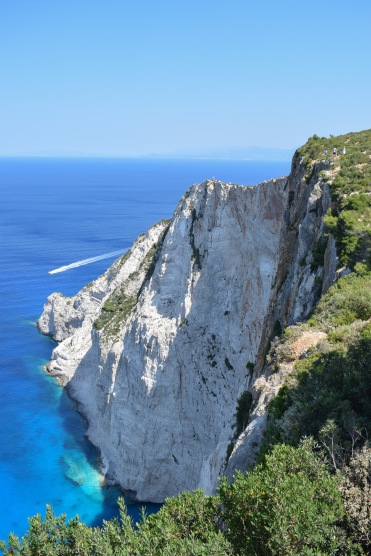 Visiting Zante in the summer months, the heat peaked at around 34 degrees every single day and road-tripping about in the midday sun was sweaty, which made finding tiny oasis’s like this feel like we’d hit the jackpot. But you can’t keep places like this a secret for too long; Porto Limnionas is drawing a bigger crowd every season, as more tourists stray away from their resorts and seek the crystal clear waters of the coves around this particular coastline. As we arrived around noon the rocks around the inlet were already spotted with beach towels and there were quite a few bodies bobbing about in the waters below, escaping the blaze of the midday sun. Despite this the whole area was refreshingly serene; no intermittent bass of nearby music, no busy beach bars, no low hum of traffic, just bodies and nature. This. Is. Lush.
The water was the best type of cold too, literally exactly what the doctor prescribed as an antidote to the stresses of navigating the slightly insane maze of Greek island roads.

Peckish from the dip, we headed up the hill. Just above the cove lies Porto Limnionas Tavern with a beautiful terrace with views for days, stretching out across the Ionan Sea. With Instagram worthy views like that it would be criminal not to stop for a Calamari plate! 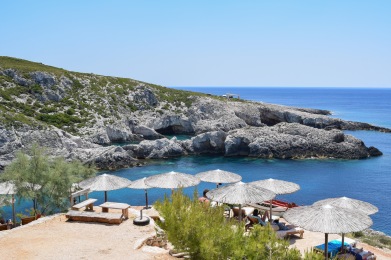 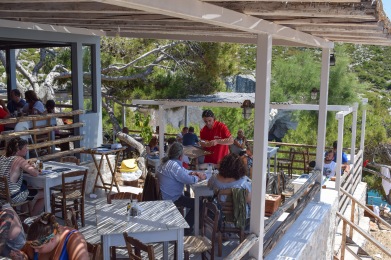 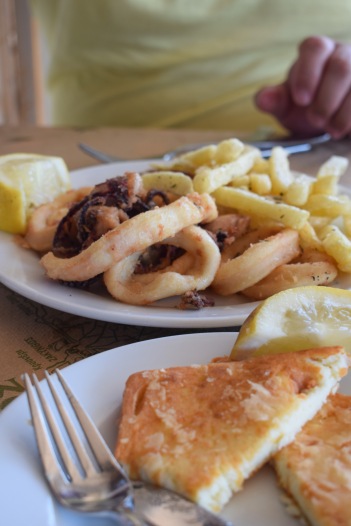 It’s all about that blue and white.
Not content with just one death-defying cliff-top viewpoint (!), we sought out the big and small Mizithres rocks on the westerly peninsula – from what I can figure out, they were named after a local cheese (Mizithra)!. Driving back down the west coast of the island, we parked up near the Keri ‘Lighthouse’ restaurant, just outside of (fun fact!) the largest Greek flag in the world (it really is pretty massive pole!).
The final section of the hill is via a rocky dirt track so should be tackled by foot; a struggle in the late afternoon sun, but after a sweaty ten minute incline we were rewarded with a perfect view of the beach and rocks below.
As with the Navagio Beach view point, the cliff remains open and exposed to a steep drop below; it’s essential to not take risks and tread carefully.

If you’re staying in Lagunas, like we did, Zakynthos town is just a short ten minute drive away on the other side of the airport. The town won’t win any awards for being one of Europe’s ‘best looking’, but with it’s sunny squares, busy alleyways, harbour-side cafes and clusters of restaurants, it’s worth exploring. We stopped for a wander along the sea front and for a traditional Gyros and then window-shopped in the old town. 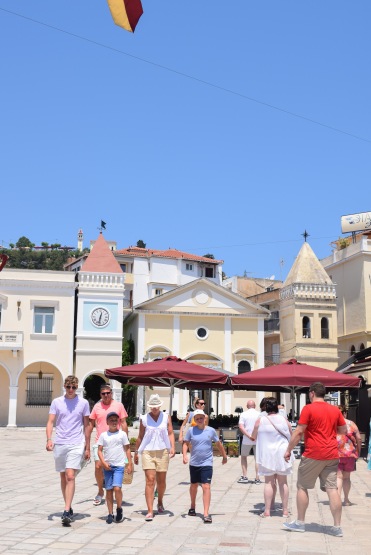 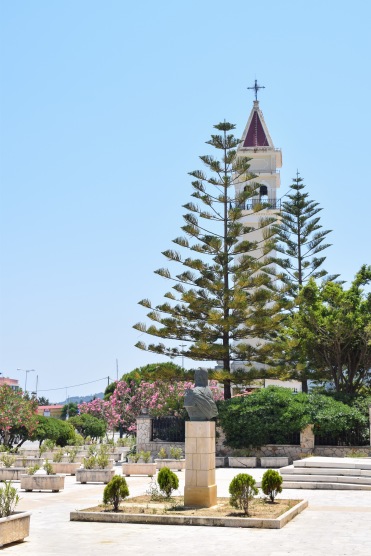 As this was my first time in Greece, I was determined to eat Greek and get properly acquainted with the cuisine. Creatures of habit, we became regulars at Cool Peppers on Laganas sea-front, where this stretch of bars and restaurants seemed to maintain a far more laid back vibe in comparison to the occasional madness on the strip.
But – damn, why didn’t anyone introduce me to Moussaka sooner? And Tyrokafteri? Spicy feta cheese dip and pita bread! We also made sure to try traditional Greek kebab and souvlaki.

Where To Stay in Laganas

We really struggled with finding accommodation, to the point where I’d almost resigned myself to the fact that I may have to kip in the hire car. We wanted to stay in Lagunas so we were next to the beach and close to the airport, but the majority of the hotels and apartments seemed to cater to party-goers or families with young children… anything for a couple of laid-back adventurers who like a splash of luxury for a flash-packer budget? Litore Luxury Living was a gift from the Greek Hotel Gods; three minutes from the beach, three minutes from the bars and restaurants – a super stylish and modern apartment block of ten boutique-style rooms, with a gorgeous enclosed pool area. It only cost a smidge more than any of the other low-starred basic hotel rooms, and with this place you could really feel you were getting value for money. Special mention for Angela, the owner of the hotel, who welcome us in with typical Greek hospitality!
No ad, no sponsored stay, just about the best place you can choose to stay when you’re in Laganas – easy.

Have you ever been to Zante? Or one of the other Greek Islands? Did I change your mind about visiting Zakynthos?

8 thoughts on “Sun, Sand and Sea Turtles: A Travel Guide to Zakynthos, Greece”